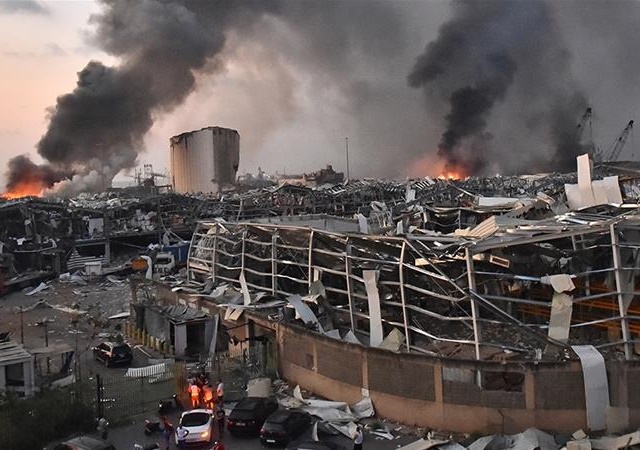 Is there anything left to happen in 2020? From Covid-19 to major economic crisis to Yemen’s largest humanitarian crisis and now massive explosions in Beirut have made everyone sit on their knees and pray for Lebanon.

The explosion was so loud that it was heard 240 kilometers away in Cyprus. It took so many precious lives, destroyed and damaged many buildings and people assets. The horrific viral video of the incident was a nightmare and a lot to digest. The whole internet is in awe and unable to get back to their normal lives.

Pakistani celebrities are grieving and showing solidarity with their posts on social media. Kubra Khan says that she is unable to figure out the magnitude of the explosion in Beirut, Lebanon. Her prayers are with the affected ones.

Rabia Butt tweeted, “The videos from #BeirutBlast are terrifying. Please take a minute to pray for #Lebnon for it’s people. The explosion is so huge that people r comparing it with hiroshima and nagasaki’s mass destruction.Can’t begin to imagine the pain of its residents.May Allah avenge their blood.”

On the other hand, Mehwish Hayat has to say this, The footage coming in from Beirut is truly devastating. My heart grieves for all the people suffering… Sending them lots of prayers and love #Beirut #BeirutExplosion #Lebanon”

Many others such as Ahsan Khan, Shaniera Akram, Hamza Ali Abbasi, Ali Gul Pir were deeply saddened and showed brotherhood with Lebanon.
Our thoughts are prayers are with affected and bereaved families!!